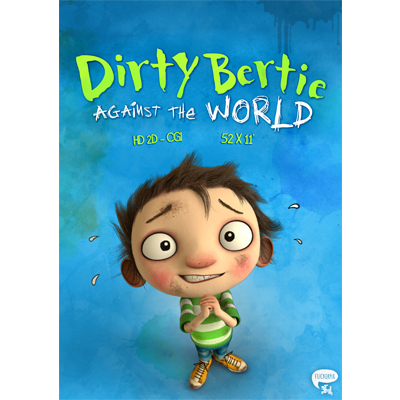 Dirty Bertie is being developed by Flickerpix with funding from Northern Ireland Screen and BFI Young Audiences Fund. The deal was struck with Christine Isteed of Artist Partners on behalf of illustrator David Roberts and Kate Shaw of The Shaw Agency on behalf of author Alan MacDonald.

Flickerpix is the animation arm of leading independent television production company Waddell Media and will be showcasing Dirty Bertie at next week’s Kidscreen Summit in Miami (10 – 13 February). Kidscreen is renowned as the kids’ entertainment industry’s most important event with representatives from more than 50 countries.

The new animation series which is currently in early development using 2D – CGI technology will be aimed at 5-8 years old focusing on the madcap adventures of the messy, disaster-prone boy Dirty Bertie and his overactive imagination. The book series, illustrated by David Roberts and written by Alan MacDonald and published by Stripes Publishing has already won the hearts of children worldwide with more than 1.7 million copies and 33 titles sold which have been translated into more than 27 languages.

Jannine Waddell MBE, Managing Director, Waddell Media says: “We are delighted to have secured the rights for Dirty Bertie and look forward to bringing the series to life and an even bigger audience through the medium of television animation. Next week’s Kidscreen Summit will enable Flickerpix to pitch Dirty Bertie to an impressive audience of broadcasters, investors and potential partners as the series has huge potential internationally with the right backing.”

David Roberts, creator and illustrator, Dirty Bertie says: “I’m so excited for Bertie and his friends to see where this new adventure with Flickerpix takes them. More silliness, more giggles and more FUN!”

Alan MacDonald, writer, Dirty Bertie says: “I’m very excited to be working with Flickerpix on developing ‘Dirty Bertie’ for TV. I’ve always felt the character and the stories have enormous potential for animation and Flickerpix has proved to be the perfect home for them. Fans of the books often ask me when ‘Dirty Bertie’ will be on television and before long I hope I’ll have an answer for them.”

Johnny Schumann, Creative Director, Flickerpix says: “Children love Bertie and his madcap adventures, with Alan’s fast-paced stories and David’s witty illustrations we feel these books are a perfect fit for animation.  There are currently 33 Dirty Bertie titles offering a wealth of material for our series with 100 wickedly funny short stories. We are delighted to be working with David and Alan to bring Bertie to life.”