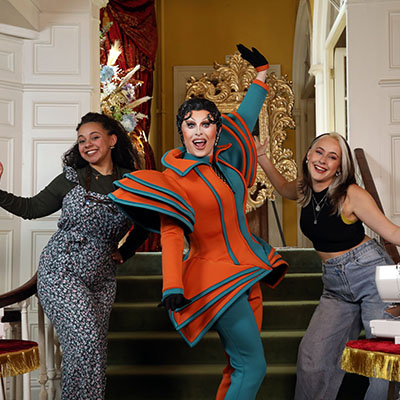 Hot on the heels of being crowned Ru Paul’s inaugural Queen of the World, Blu Hydrangea returns to our screens with a new series, Stitch, Please!, beginning Monday 18th April on BBC Three at 8:30pm and Wednesday 20th April on BBC One Northern Ireland at 10:45pm. The three-part series was produced by Waddell Media with funding from Northern Ireland Screen.

Stich, Please! sees contestants compete against one another to create garments inspired by the hottest looks in pop culture. Each episode introduces viewers to a new pair of stitchers who put their sewing skills to the test, and explores their personal stories and passion for costume design.

Stitch HQ is based at a seventeenth century castle in County Antrim and the stitchers have 12 hours and a £100 budget to create looks inspired by the works of some world-renowned costume and fashion designers before going head-to-head and modelling their outfits on the runway.

Blu said: “I’ve been blown away by the talent of the Stitchers and I think viewers will be too. It’s a fast-paced show full of fun and glamour and really taps into my love of pop culture. If the audience have half as much fun watching as I’ve had with the Stitchers, they’re in for a real treat.

“Hosting this show has shown me that there is a wealth of talent out there in the sewing, crafting and cosplay communities. Stitch, Please! gives them an opportunity to really showcase their skills.”

In episode one the theme is The Hunger Games and contestants Katherine and Yasmine get plenty of inspiration from the extravagant garments worn by characters who feature in the dystopian adventure novels and film franchise.

Their different approaches to this challenge provide Blu, and Emmy and BAFTA award-winning guest judge Michele Clapton, plenty to think about when it comes to deciding who is Stitch Perfect.

Costume designer Clapton has stitched, embroidered and outfitted iconic characters from Game of Thrones to The Crown, crafting an array of fabulous costumes from heavy armour to embellished royal gowns.

In the second episode the stitchers take on fashion’s biggest night out – The Met Gala – the annual New York fundraiser that has provided some stand-out red carpet looks from the world’s best designers.

Lucy and Matthew will have to channel every ounce of their creativity to capture the essence of these high end looks and with guest judge and legend of British fashion, Julien MacDonald on hand to evaluate their efforts with Blu, the stitchers have a lot to live up to.

In the final episode contestants Mariam and Amy are tasked with recreating looks from the ultimate nineties fashion flick – Clueless – a film that has influenced style and pop culture since its release over 25 years ago.

The Stitchers take on different style inspirations from the film and truly let their creativity run free, while County Kerry native and fashion designer, Colin Horgan joins Blu as a guest judge.

Having worked with some of the biggest names in showbiz from Lady Gage to Little Mix, Horgan has earned acclaim for his bold creations and is on hand to help Blu declare a winner.