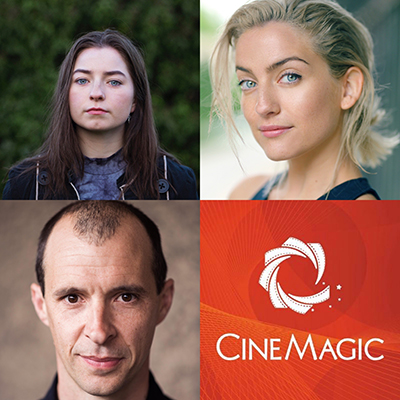 Many well-known faces from the world of TV and film will over the next couple of weeks, host masterclasses as part of Cinemagic’s Career Crafts programme.

This year they will include sessions on acting for film and TV, directing, sports presenting, TV & radio presenting and writing for screen. Due to Covid-19, these sessions will take place online.

“I’m thrilled to be part of Cinemagic’s online Q&A events at this year’s festival. It’s a really exciting time for Irish film makers at home and abroad and Cinemagic’s programmes are the perfect way to motivate and celebrate the future trailblazers of the industry!” India Mullen

“It’s fantastic to be part of the 2021 Cinemagic virtual festival and helping young audiences to get a better insight into the world of TV and film. I’m so pleased to have a chance to be part of that work with the Acting Q&A next week and am really looking forward to seeing what questions they have for me and hoping I can share some great conversation with them.” Tom Vaughan-Lawlor

“I’m looking forward to talking with young aspiring actors to tell them about my route into acting and to share some advice based on my own experiences and knowledge about this exciting industry as well as explaining challenges and responsibilities the job brings.’” Hazel Doupe

The events taking place will include:

The Career Crafts programme is a cross-border initiative and open to all young people aged 8-25 in Ireland and Northern Ireland. Book online at www.cinemagic.org.uk.