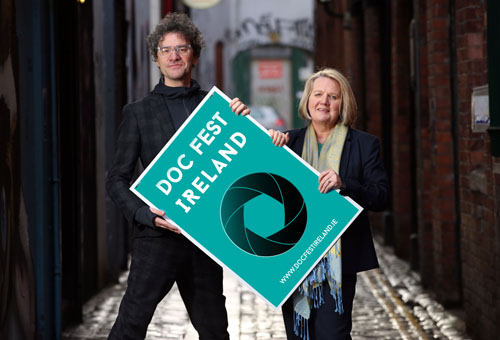 A new all-Ireland documentary film festival will see a host of top decision makers, investors and financiers from the international film industry travel to Ireland.

It is the first ever all-Ireland, industry focused, documentary festival, showcasing the hottest Irish and international films from award-winning documentarians.

The new festival will also host a marketplace, DocMarket with a series of industry events, masterclasses and pitching sessions for new and emerging filmmakers, giving them the chance to meet with the biggest decision-makers in the industry to pitch ideas and learn about the business side of filmmaking.

The festival will attract some of the biggest names in the industry including Dogwoof, BBC Storyville, The Kennedy Marshall Company, TG4, Channel 4, CAT&Docs, USA PBS, RTÉ, Northern Ireland Screen and Screen Ireland and a host of other investors who will be in Belfast to engage with filmmakers and develop new opportunities.

Docs Ireland will showcase the best new documentary films, presenting Irish and international feature length and short documentaries, as well as a number of other special events with Alex Gibney, Margo Harkin, Thom Powers and Don Letts, amongst others.

Acclaimed American documentarian and Oscar-winning director of Loughinisland documentary, No Stone Unturned, Alex Gibney, will take part in an event on the opening night of the new festival.

The full programme for the festival will be presented at an event in the Project Arts Centre in Dublin at 1-2pm on Thursday 30 May.

The festival includes screenings, talks and special events. Awards will also be presented for:

“This is a fantastic time for the film industry in Ireland, there’s a real sense of excitement and opportunity.  We are a nation of storytellers, and it seems year on year our indigenous talent becomes more and more confident and assured in their work.

“Documentaries are more popular than ever and there is a huge appetite for them worldwide. The rise of streaming platforms like Amazon and Netflix, and the growth of theatrical releases for documentaries, show that there is a hunger for real-life, compelling and beautifully told stories. By showing people here the very best work from around the world we can light a spark and inspire the next generation of documentarians.

“We are looking forward to hosting 30 national and international guests, all of whom are key decision makers in the documentary world.”

Other highlights from the festival’s programme include:

Taking the remarkable Folsom Prison recording as a central motif and featuring interviews with family and celebrated collaborators, the film explores the artistic victories, the personal tragedies, the struggles with addiction, and the spiritual pursuits that colored Johnny Cash’s life.

A deep portrait of the controversial businessman with Alec Baldwin playing John DeLorean in re-enactments of key scenes in his life.

An hour-long conversation between the respected American journalist and the Irish civil rights activist filmed in 1972.  Bernadette McAliskey will participate in a post-screening Q&A.

This elegantly shot, and masterfully crafted portrait of Palestinian life offers a rare chance to be immersed in the heart of Gaza.