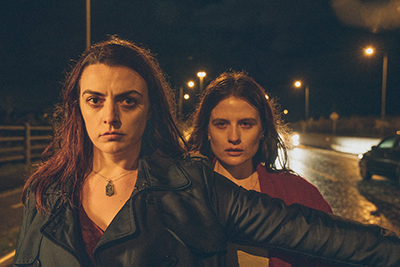 It has been announced today that Cathy Brady’s Wildfire will have its world premiere at the prestigious Toronto International Film Festival (TIFF). Developed and produced with funding from Northern Irealand Screen, Wildfire is the first feature film from the Newry writer/director.

Filmed on location in Northern Ireland and the Republic of Ireland, Wildfire stars the late Nika McGuigan (The Secret Scripture, Traders), and Nora-Jane Noone (Brooklyn, The Magdalene Sisters, The Descent), and tells the story of a missing woman who returns home, igniting an intense bond with her sister. United they unearth their mother’s past but the truth has devastating consequences.

Speaking about the film’s selection Cathy Brady said; “I’m deeply honoured and proud to have Wildfire premiere at TIFF. This film is very close to our hearts and all the more poignant as Nika our incredible co lead actress lost her brief but brave battle with cancer during post-production. What a tribute it will be to finally share this film at TIFF. Thank you to all the cast, crew, producers and financiers for your support and dedication.”

The Toronto International Film Festival (TIFF) takes place from 10-19 September and has been tailored to fit the moment, with physical screenings and drive-ins, digital screenings, virtual red carpets, press conferences, and industry talks. In recent years, films from Northern Ireland have had a consistent presence at TIFF with six films selected for screening in the past five years.

This news from Toronto follows hot on the heels of Venice Film Festival which announced earlier this week that Northern Ireland-shot Nowhere Special has been selected for its 2020 line-up.

Richard Williams, CEO of Northern Ireland Screen, said: “It is certainly a good week for the screen industry when two internationally renowned film festivals have selected two films that were made in Northern Ireland. It is particularly exciting and well deserved that an A-list festival such as Toronto has chosen to champion Cathy’s debut feature film. Venice and Toronto are incredible platforms at which to showcase local talent. Audiences at both festivals are in for a real treat. We offer our huge congratulations to the cast and crew involved in Nowhere Special and Wildfire.”

In 2014, Brady directed an episode of Jack Thorne’s BAFTA-nominated drama-thriller series Glue. Most recently she was the sole director of Stefanie Preissner’s series Can’t Cope, Won’t Cope for RTE/BBC3/Netflix: a darkly comic Dublin-set drama about two friends coming to terms with adulthood. In 2017 Brady was one of fifteen female directors selected for BAFTA Elevate, a bespoke programme that elevates talent from under-represented groups to the next stage of their career.

Wildfire is produced by David Collins for Samson Films, Charles Steel for Cowboy Films and Carlo Cresta-Dina for Tempesta Film. An Irish-UK co-production, Wildfire is supported by the BFI, Screen Ireland, Northern Ireland Screen and the Wellcome Trust.