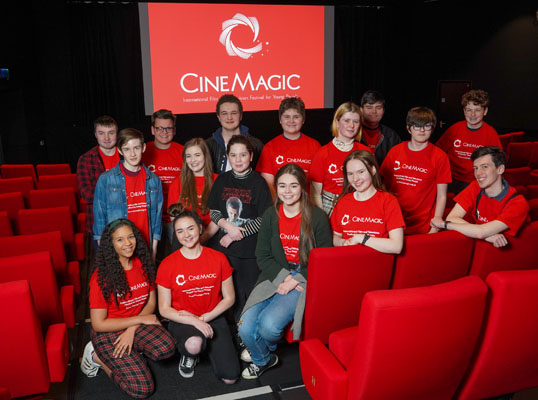 Cinemagic has launched its annual call for young film enthusiasts to take on the role of ‘film consultants’ this July in Belfast, to help programme a series of films for the annual Cinemagic Festival that takes place in October 2019 and this year Cinemagic celebrates its 30th Anniversary!

The participants in the young consultants’ scheme will work with the Cinemagic team in Belfast to help steer the choice of films for the Festival, as they watch and critique films from around the globe! If you know a budding film critic who would enjoy the opportunity to spend time with Cinemagic, this is a fantastic opportunity to meet other likeminded young people and have fun deciding the content of the largest film festival for young people in the UK and Ireland.

Chris Shaw, Cinemagic Programmer said: “ We are looking forward to welcoming young people aged 8-18, to our annual young film consultants panel, which has been one of the longest running initiatives of the Cinemagic Festival since its inception 30 years ago. The young film consultants will have the opportunity to watch and review international films guided by the Cinemagic team and there will be lots of opportunities for discussion and debate around programming.”

Young people aged 8-11, 12-14 and 15-18 with a keen interest in film and the enthusiasm to discuss and debate within a group should register by emailing [email protected] for a registration form. The cost to participate is £20 per person (if paying online there is a £2 booking fee) payable in advance of July to secure the booking..

Young consultants will meet on the following dates in The Crescent Arts Centre, University Road Belfast, as per age category and participants must be available for both dates in their group. The young consultants programme is open to all young people from Northern Ireland and Republic of Ireland.