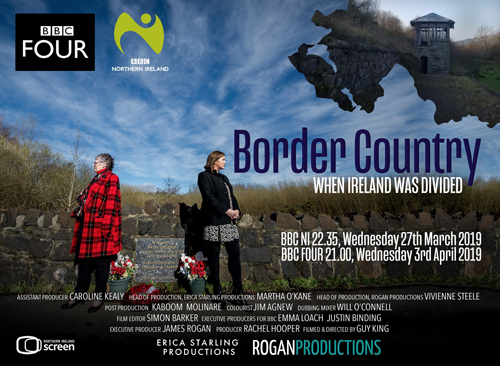 The border between the United Kingdom and the Republic of Ireland has meandered across rural Irish farmlands since its creation in 1922.

Throughout this time film crews and journalists have descended upon the border, attempting to understand its absurdities and contradictions – and the turmoil it can cause.

At yet another crucial moment in its history, Border Country: When Ireland Was Divided brings almost 100 years of archival footage together with the stories of people whose lives have been affected by the border. The programme, which received funding support from Northern Ireland Screen, broadcasts on BBC One Northern Ireland on Wednesday 27 March at 10.35pm.

From the moment that the border was put in place, it changed the way people lived. Customs posts and smuggling, army control towers and terror attacks eventually became the stuff of everyday life.

Some of the most unconscionable murders of the Troubles took place along the border’s 300-mile route.

Despite its long history of political conflict and violence, the border story is not without humour and hope.

From the Catholic and Protestant undertakers who shared a hearse to the reconciliation between an ex-republican activist and an IRA victim, the story of the border reveals the depth of humanity in the region as well as the brutality it experienced.

Border Country: When Ireland Was Divided features new interviews with a range of contributors from all walks of life. Paddy is older than the border: at 102 years’ old, he still likes to drive his motorbike along the border. Ken grew up 200 yards from the border and because of his British identity, says he felt in the minority.

Anne’s uncle was killed on Bloody Sunday, a death that started her on a radical journey. Kathleen’s husband was killed after being forced to drive a bomb to an army checkpoint where it was detonated.

As the global trend in social division deepens along old national/international lines, Border Country: When Ireland Was Divided offers an insight into life on the border through the camera lens and through the stories of the people who lived there.

Border Country: When Ireland Was Divided is also available to view on the BBC iPlayer.