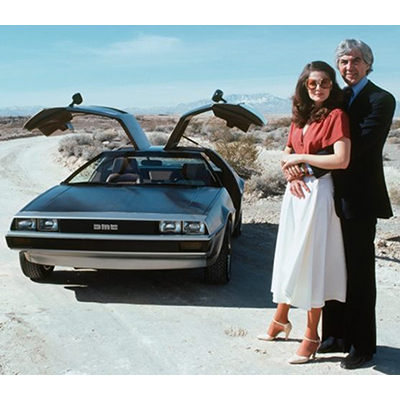 DeLorean: Back From The Future, a two-part theatrical documentary series exploring the rise and fall of automaker John Z DeLorean and his attempt to build the car of the future in the 1980s, airs tonight (Monday 26th April) on BBC One Northern Ireland at 9pm.

A co-commission with BBC Two and Netflix, with funding from Northern Ireland Screen, Fired Up Films’ two-part series features exclusive rare and unseen footage filmed by Oscar-winning directors DA Pennebaker and Chris Hegedus. The documentary is the latest film in BBC Northern Ireland’s new Once Upon A Time in Northern Ireland documentary series to be released.

This archive rich project explores how automaker John Z DeLorean rose from the ghettos of Detroit to build his American dream in Northern Ireland.

This archive rich project – part social history, part psychological profile – explores how automaker John Z DeLorean rose from the ghettos of Detroit to build his American dream in Northern Ireland – funded by £84million of British tax payers money – and how a fairy-tale all went horribly wrong, through a trail of corporate waste, greed and fraud that ended up in an FBI cocaine-trafficking sting.

DeLorean: Back From The Future combines testimonies and first hand witnesses from family members, colleagues, workers, journalists and colourful news footage documenting his life and career. For the first time in 40 years ex-wife and fashion model Cristina Ferrare gives an insider’s account about her time with DeLorean and the dramatic collapse of his company.

“This psychological deep dive aims to get inside the mind of John DeLorean, to truly understand who he was and just how far a man will go to save his career” says Executive Producer Jon-Barrie Waddell. “It’s a fascinating human story of ambition and greed, and how the car of the future goes up in smoke”.

Scottish composer Paul Leonard Morgan was commissioned to produce the soundtrack, with animation by local artist Peter Strain and postproduction by Yellow Moon.

The second episode airs on Tuesday 27th April at 10.45pm on BBC One Northern Ireland.