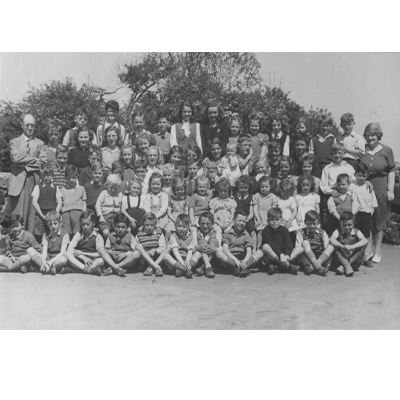 Airing on BBC Two Northern Ireland on Sunday 15th September at 9.45pm, Alison revisits the landscape of her childhood, remembering the people and places that first inspired her to pursue a career in film-making, and discovers how her own story connects with the legacy of a visionary teacher, R.L Russell.

Alison’s journey back in time takes her to her father’s old primary school, the little two room school at Tullygrawley crossroads, where Master Russell taught generations of children, destined for a working life in the linen mill or on the farm. He believed that encouraging children’s creativity and awareness of the world around them was the foundation of an education for life. The majority of his pupils would only have a primary school education, but the lessons learned at Tullygrawley have never left them. Guided by Master Russell, they produced art and poetry to a standard that many children of today would struggle to match.

Alison meets a number of Master Russell’s pupils – some now in their nineties – whose memories of schooldays 70 and 80 years ago are as fresh and vivid as if they happened yesterday.

She discovers their work, preserved in the collections of the Braid Museum and the Causeway Coast and Glen’s Council.

Accompanied by the artist Ross Wilson, she returns to her own primary school, to set some creative challenges for the pupils of today.

Through making this documentary, Alison also explores her own Ulster-Scots heritage, something she knew very little about, and reconnects with a way of speaking and seeing the world that she says ‘used to be a natural as breathing.’